We use tracking technologies to analyze and improve your experience in CALMS application. Read more in our privacy policy.
Do you accept tracking?

Remote energy monitoring and optional control systems are designed for large facilities such as industrial factories, with some degree of automation.

Edge devices collect data from sensors, telemetry streams, user inputs or pre-programmed procedures and send it to CALMS cloud. The data it there stored, aggregated and analyzed. It can be then accessed via CALMS web application at app.calms.com.

Once limited to SCADA in industrial settings, remote monitoring and control is now applied in numerous fields, including energy systems:

Channel within CALMS platform represents an individual signal that we are observing. Channel is a entity that belongs to a Calms energy system and represents a measured or calculated signal.

Virtual channel is a channel that does not have a stored signal, but is calculated on-the-fly. This is necessary only because the value of this channel is dependent on the aggregation used, meaning that its values cannot be computed in advance.

It is specifically designed for SSP, which is defined as mean(POWER) / mean(FLOW).

Metric channel is a channel similar to measurement channel, but instead of receiving values from device inputs it receives them from various system metrics, for example waste flow, efficiency and reliability score.

But it also cannot be measurement channel because it would be hard to enforce consistency with relations to device inputs and system metrics.

To see the list of channels in your system, visit system setup and select “Channels” tab.

All channels in CALMS are stored in International system of units - SI units in database and can be converted any time to major or custom defined units by user.

CALMS Free air delivery (FAD or f.a.d) — the actual quantity of compressed air converted back to the inlet conditions of the compressor.

Note: The units for FAD are cfm in the imperial system and m3/min or l/min in the metric system. The units are in general measured according to the ambient inlet standard conditions found in ISO 1217.

There is no universal standard for rating air compressors, air equipment and tools. Common terms are:

The relation between the two volume rates of flow is (note that the simplified formula below does not account for humidity) - use CALMS calculator (Unit converter):

Every channel (expect virtual ones) can be set to trigger an alarm in specific conditions. For example, when pressure falls below a specific value.

The easiest way to summarize performance of an energy system is to observe key performance indicators (KPI). CALMS web application shows then under Results page: 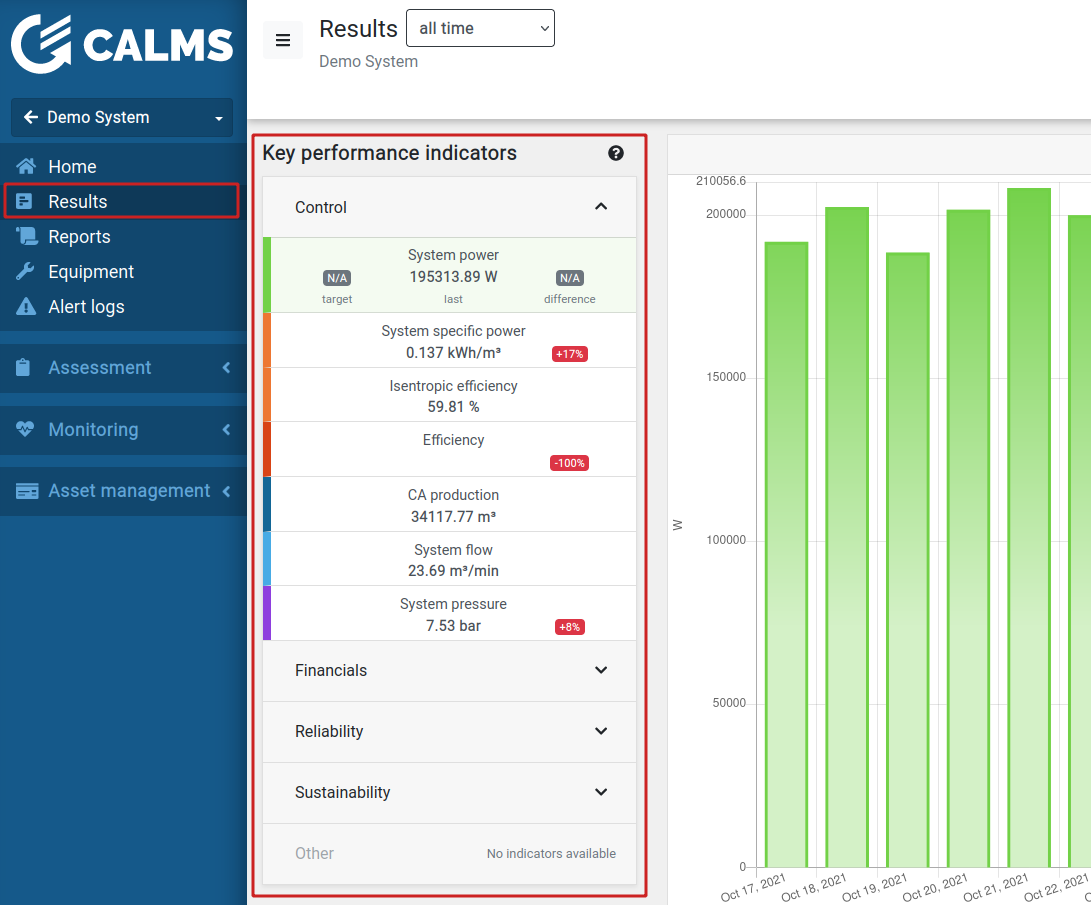 SSP makes comparing compressors or compressor stations between themselves difficult because this indicator is sensitive to pressure. It can only be used to compare compressors or stations running at the same pressure. A compressor with lower efficiency may have a better (lower) specific power because it is compressing to a lower discharge pressure.

To calculate the isentropic efficiency we can use this formula. All entries must be in primary ISO units

As “E/V” is actually SSP we can also write:

SSP in this case must be in Joules/cubic meter

Usage of isentropic efficiency is considered more suitable for the following reasons:

System redundancy or Available Redundant Capacity is the term used in capacity / power planning that customers may not know, but they do ask for it. What they ask is, “Can I safely add new compressed air user /line without overloading and potentially bringing down my facility? Or do I need to buy new compressor ?

Redundancy is a system design in which a biggest compressor is duplicated so if it fails there will be a backup. Redundancy has a negative connotation when the duplication is unnecessary or is simply the result of poor planning.

Some systems can have different redundancy requirements, like power plants they are aiming for 300%, pharmaceutical companies 200% …

This document explains how CALMS measures, transfers and aggregates signals - the underlying structure of channels.

At first, we start with an analogue signal, that is being measured by the instruments.

The measurement happens at regular time intervals, producing values with accuracy up to 10-16.

The result is so-called time-series: a series of data points of time and value.

To compute averages, integrals and other summaries, value of every point is extended up to the next data point measured. This behavior seems natural, because we can assume that the value of the signal is unchanged until we read a new value.

It is obvious that reconstructed signal is not equivalent to the original analog signal and that perfect fit would require infinite storage, bandwidth and computing power. To minimize the effective difference between the two while keeping relatively low size and complexity, we provide following settings:

Alternative interpretations of the time-series as functions would include nearest neighbour and linear interpolation, but we have decided against these approaches due to significant increase of complexity they introduce. For more information, refer to the summaries section.

Plotting stepped signals is very inconvenient, because crossing lines may be hard to distinguish and look unnatural, especially with large time steps.

It should be noted that when the plot is up-sampled (eg. as a result of plotting along signal with higher sample rate) it will increasingly start to look like the underlying stepped signal it represents.

Even though the reconstructed signal is not equivalent to the original signal, it is used as its closest approximation and basis for all following processing. Because computational reproducibility is an important aspect of the monitoring pipeline, we will here explain how we calculate summaries in a way that can be reproduced in different parts of our application or by hand, to verify their integrity.

The two types of calculations we use are what we call aggregation and summary. Aggregation processes a signal and reduces its number of points, producing a new signal, while summary takes a signal and produces some statistic (eg. average).

The naive approach for both calculations (which we used for a long time) would be to use average of data point values. It turns out that this calculation is not stable and has many corner cases where it does not work. For example take a query of power usage for months of December, January and February with monthly aggregation:

We can now compute summaries as average of averages:

Unfortunately, both total power and energy used may be incorrect because:

Instead of using average of data point values, we imitate weighted average by computing integral and duration of each data point. Duration is computed as time from current data point to the next one and the integral (of this square region) is just duration * value.

To compute weighted average of some period, we first sum all integrals, sum all durations and then divide the two.

In this way, we were able to construct an aggregation pipeline, that produces same results regardless the aggregation, missing data or irregular sampling rate.

Here is another example that demonstrates how this works on signals:

Notice how up-sampling of any of the chunks does not change the sums and the weighted average. If the second chunk (D=2 I=4) was split into two smaller chunks with (D=1 I=2), their total duration would still be 2 and integral would still be 4.

Warning about average of ratios

CALMS supports non-linear calculations (such as ratio), but it should be noted that their averages may not represent the result you intended to compute.

An honest mistake would be to use the first approach while the second is the one that you would usually want. It should be noted that they are not equivalent.